Urban Design and the Principle of Least Effort

Looking out the window of an office in Macau and seeing the paths worn in the grass by pedestrians taking the shortest route available reminded me of two things— George K. Zipf’s 1949 book, Human Behavior and the Principle of Least effort, and urban walkability. 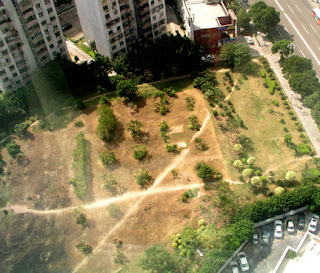 Zipf, a linguist, was initially interested in the relationship between the rank order and frequency with which words appeared in written language. The mathematical relationship he observed became known as an example of Zipf’s Law. Of relevance here was that he found that a similar relationship between aspects of urban design. For example, ranked city sizes and their population, telephone calls and geographic proximity and so on.

Recently, there has been a flurry of interest among mathematicians in the way the characteristic curve identified by the late Professor Zipf reflects the link between the size of cities and the resources needed to operate them. And this observation allows me to segue to talking about walkability. I would put money on there being a Zipfian relationship between urban density and walkability. The implication being that if we know the density of an area, we should be able to have a fair crack at estimating the extent to which people will walk rather than use their car for the daily errands of life.  This would be one step in estimating the economic value in health and wellbeing that would be achieved at certain densities. (Of course, this assumes that the density includes the shops, playgrounds and services people need.)

Some people are already working on this issue of trying to find the “sweet spot” for urban density at which social benefits might occur. For an example, see Shaping Suburbia.

Another contribution to the field is the online tool at WalkScore. The tool lets you calculate a Walkability Score for any address in Australia and the U.S. based on urban density and location of amenities.

Based in Sydney, we work all over Australia. Established in 1988, we have a depth of experience to support our advanced technical skills.

Visit our website Environmetrics Pty Ltd, for more information about our services.